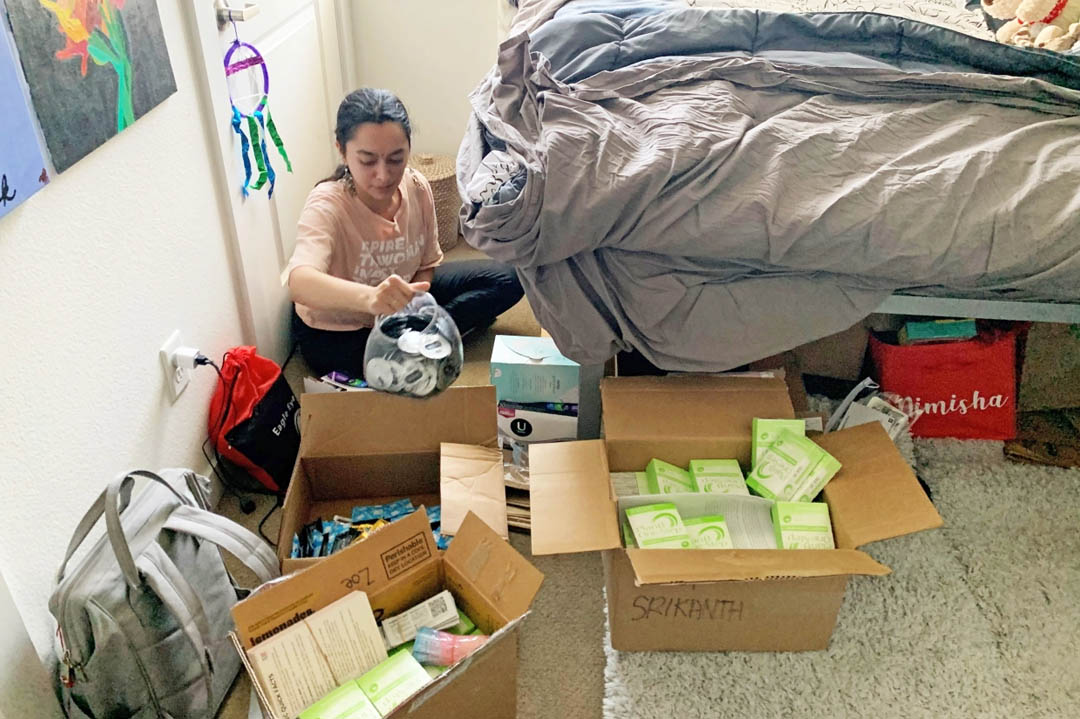 Nimisha Srikanth, a public health major at Texas A&M University, keeps boxes of donated Plan B, condoms, and pregnancy tests under her bed. As president of Feminists for Reproductive Equity and Education, she operates an emergency contraception hotline and delivers free pills to any A&M student who contacts her. (SARAH VARNEY / KHN)

COLLEGE STATION, Texas — “Mysterious Dolphin” needed an emergency contraception pill dropped off on a porch outside of town.

Allison Medulan, a sophomore at Texas A&M University who had just come from biology class, saw the request on her cellphone via an anonymous text hotline. She gathered a box of the one-dose contraceptive, a pregnancy test, and a few condoms from her apartment and headed over. Inside a bewildering development of modest townhomes, Medulan tucked the plastic delivery bag next to the doormat.

Closing the car door, she stared ahead and took a breath. Medulan, 20, didn’t know the woman’s real name. It had been converted into a moniker by another volunteer operating the hotline.

In this college town in farm country about two hours north of Houston, Medulan and other volunteers for Jane’s Due Process, an Austin-based nonprofit, are trusted allies for panicked young women scrambling for a solution after contraceptive failure or unprotected sex.

Sexual health advocates have long sought to expand access to emergency contraception — over-the-counter medications that prevent fertilization if taken within days of sexual intercourse — with the aim of preventing unplanned pregnancies that can derail educational and professional goals for women and teenagers. A bill that recently passed the Illinois General Assembly would require public universities to offer emergency contraception in vending machines, and volunteer distribution networks exist in numerous states, including Pennsylvania, Alabama, and Georgia.

But in Texas, these grassroots efforts in College Station, Lubbock, Austin, and the Rio Grande Valley have taken on heightened urgency after state lawmakers banned nearly all abortions after around six weeks of pregnancy. Demand for emergency contraception has skyrocketed. Nurx, an online prescription company, registered a 173% increase in orders from Texas in September 2021, the month the law took effect, compared with the previous month. Every Body Texas, an Austin-based group that awards federal birth control funding, received more than 200 requests for emergency contraception the first week its website began taking orders.

“There is anxiety around these laws and feeling like you’re going to be punished for having sex and pregnancy is that punishment,” said Graci D’Amore, 33, program and operations manager at Jane’s Due Process.

Jane’s Due Process reaches out to teens on Instagram and Facebook with digital ads that clear up fallacies about who can buy emergency contraception and where. Minors in Texas and nearly two dozen other states, including teen mothers already raising a child, must have their parents’ consent to get a prescription for hormonal birth control.

Emergency contraception, which is available without a prescription, is exempted from those restrictions. But the medication can be difficult to find in rural areas of Texas. And many pharmacies that do carry it keep it in locked cases or behind the pharmacy counter, requiring purchasers to ask for access. At a cost of $35 to $50 a pill, the medication is unaffordable for some young people.

The Jane’s Due Process “repro kits,” delivered free to those who request a pill via text message or phone call, include a booklet that lists the nearest abortion clinic, often hours away for Texans outside the state’s metropolitan areas.

“It is a Texas teen’s right to buy emergency contraception, pregnancy tests, and condoms,” said D’Amore. “Not only are we trying to provide access but also education.”

In many ways, these groups operate in an educational desert when it comes to abortion, contraception, and even sex. In Texas, many Planned Parenthood and other sexual health clinics that helped an earlier generation of women are long gone, replaced by hundreds of crisis pregnancy centers that counsel women against abortion and do not offer contraception.

As Texas swerved sharply to the right in recent decades, anti-abortion politicians vowed to run Planned Parenthood out of the state, enacting a cascade of restrictions. In 2011, Republican lawmakers slashed funding for the state family planning program by 66%, and more than 80 family planning clinics closed.

The impact was swift. Researchers found that from 2011 to 2014 the number of women using the most effective forms of birth control — IUDs, implants, and injections — declined by a third in the counties that had been serviced by a Planned Parenthood affiliate, while births by poor women on Medicaid increased 27% in those counties. The state partially restored funding in recent years, but many clinics never reopened.

To fill that gap, enter a network of volunteer groups, nearly all made up of women — young and old. With the politics of abortion and contraception converging, they know they are the next target. Many of the people seeking to ban abortion entirely in Texas also want to ban emergency contraception. They contend that life begins at fertilization and that any medication that interrupts that process violates their religious beliefs.

Religious activists in Texas have been out front in this effort, harnessing the state and local governments in their mission. Texas is the only state that does not pay for any form of emergency contraception for low-income women and girls in its state family planning program. Local councils in at least 40 Texas towns have adopted an ordinance that declares them “sanctuary cities for the unborn.” The movement, which began in Waskom, Texas, along the Louisiana border, criminalizes abortion and bans emergency contraception.

Other states are making similar moves.

In Arizona, Arkansas, Georgia, Idaho, Illinois, Mississippi, and South Dakota, pharmacists can refuse to dispense emergency contraception if it conflicts with their religious beliefs, and Arkansas and North Carolina exclude the medication from mandatory contraceptive coverage, according to the Guttmacher Institute, a research group that supports abortion rights. Alabama lawmakers have introduced legislation that would prohibit the state health department from using state funds to pay for emergency contraception.

Many conservative Catholics and evangelical Protestants contend that the pills — marketed under the brand names Plan B and Ella — and intrauterine devices are forms of abortion. But emergency contraception is entirely different from the medications prescribed to induce abortions.

Plan B is a hormonal medication that prevents pregnancy by delaying the release of an egg from the ovary or preventing fertilization. It does not harm an existing pregnancy. IUDs generally work by preventing sperm from reaching an egg, and some forms make the uterus lining inhospitable to attachment of a fertilized egg.

For Nimisha Srikanth, a public health major at Texas A&M in College Station, pushing back against that conservative tide has become an ethical crusade. “People have sex because they feel good, not because they want a kid,” she said, sitting at the kitchen table in her tidy off-campus apartment. “Taking that away from them is morally incorrect.”

A petite 21-year-old with hip-length black hair, Srikanth keeps boxes of donated Plan B, condoms, and pregnancy tests tucked under her bed. As president of Feminists for Reproductive Equity and Education, known as FREE Aggies, she operates an emergency contraception text hotline and delivers free pills to any A&M student who contacts her, usually meeting them at the student center and handing over a brown paper bag.

Since she began running FREE Aggies, she has rooted out spies from campus anti-abortion groups who crashed online meetings and switched to the private chat platform Discord. “If A&M requests our correspondence, Discord can’t give it to them,” she said.

The emergency contraception deliveries by volunteers with FREE Aggies and Jane’s Due Process are legal, but their clandestine nature fuels the stigma that young people caring for their sexual health is shameful, said Holly Musick, who attended Texas A&M in the late 1970s, a few years after abortion became legal nationwide.

“It was a much more liberal time,” she told Medulan when they met recently at the student center. “There was a Planned Parenthood on the north side of town, and students could walk to get birth control pills.”

Now, Musick, 64, volunteers for the Jane’s Due Process hotline, dropping off pills around town. The precariousness of women’s access to sexual health care scares her. She signed up for a delivery that had been requested during a narrow window of time at a specific place. “It got canceled right before I left my house, and I’m thinking, ‘This poor girl.’”

Medulan brims with anger. She was raised to think she could be anything in life but sees how abortion politics in Texas have circumscribed her world. Her boyfriend often accompanies her to make deliveries. He worries an anti-abortion radical will try to kill her. She’s been asked to leave the pills under a car, under a doormat, in a fake plant outside a house.

← Prev: Why Cheap, Older Drugs That Might Treat Covid Never Get Out of the Lab Next: At US Hospitals, a Drug Mix-Up Is Just a Few Keystrokes Away →