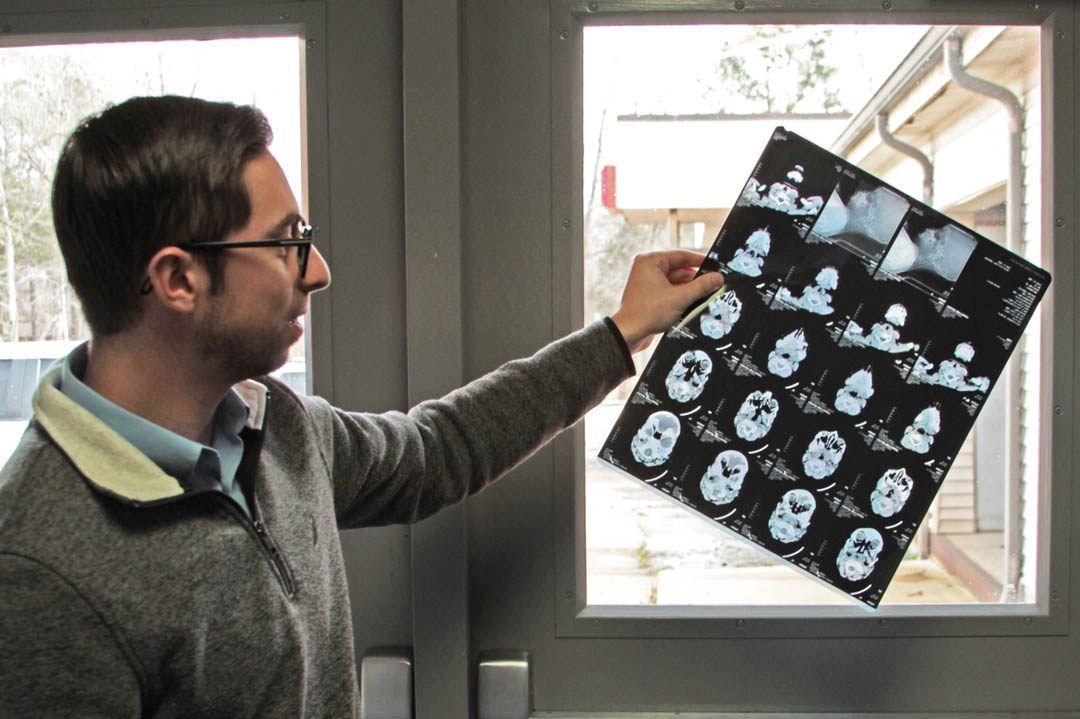 Kyle Kopec, Braden Health’s chief compliance officer, holds up a sample of diagnostic images left behind at a Tennessee hospital. As the company takes over abandoned hospitals, a major task is figuring out what to do with old medical records stacked in boxes. (BLAKE FARMER FOR KHN)

ERIN, Tenn. — Kyle Kopec gets a kick out of leading tours through the run-down hospitals his boss is snapping up, pointing out what he calls relics of poor management left by a revolving door of operators. But there’s a point to exposing their state of disrepair — the company he works for, Braden Health, is buying buildings worth millions of dollars for next to nothing.

At a hospital in this rural community about a 90-minute drive northwest from Nashville, the X-ray machine is beyond repair.

“This system is so old, it’s been using a floppy disk,” said Kopec, 23, marveling at the bendy black square that hardly has enough memory to hold a single digital photo. “I’ve never actually seen a floppy disk in use. I’ve seen them in the Smithsonian.”

Not only is Kopec young, he had limited work experience in hospitals before helping lead a buying spree by Braden Health. His prior work experience includes a three-month stint as an intern in the Trump White House, on assignment through his volunteer position in the U.S. Coast Guard Auxiliary. He worked his way through college at Braden Health’s clinic in Ave Maria, Florida, and became a protégé of Dr. Beau Braden, the company’s founder. Now Kopec’s official title is chief compliance officer, second in command to Braden.

The local governments that own these facilities are finding that remarkably few companies — with any level of experience — are interested in buying them. And those that are willing don’t want to pay much, if anything.

“When you’re on the ropes or even got your head under water, it’s really difficult to negotiate with any terms of strength,” said Michael Topchik, director of the Chartis Center for Rural Health, which tracks distressed rural hospitals closely. “And so you, oftentimes, are choosing whoever is willing to choose you.”

At this point, large health systems have acquired or affiliated with the hospitals that have the fewest problems, Topchik said. And what’s left has been picked over by operators, some of which have gotten in trouble with insurers and even law enforcement for shady billing practices.

“You can make it profitable,” Topchik said. “But it takes an awful lot to get there.”

Braden, an emergency room doctor and addiction specialist, used his savings and inherited wealth to get into the hospital-buying business in 2020. Previously, he tried to build a hospital in southwestern Florida, where he owns the large rural clinic in Ave Maria. After running into regulatory roadblocks, he saw more opportunity in reopening hospitals — which brought him to Tennessee.

Braden Health’s corporate headquarters has 40 employees, according to Kopec. It’s a limited liability company and privately held, so it doesn’t have to publicly share much about its financial figures. But in filings for a certificate of need that outlines why a health care facility should be allowed to operate, Braden revealed $2 million in monthly revenue from the one hospital it ran in Lexington, Tennessee, and its balance sheet showed more than $7.5 million cash on hand.

Since buying that Lexington hospital in 2020, Braden Health has signed deals for three other failing or failed hospitals and has looked at acquiring at least 10 others, mostly in Tennessee and North Carolina. Braden Health’s strategy is to build mini-networks to share staff and supplies.

At the hospital in Erin, much of the facility’s equipment is older than Kopec. And he said using outdated technology has caused Medicare to penalize the hospital with reduced payments.

The attic houses a ham radio system that seemingly never got much use, Kopec said on his way out to the roof. He wanted to show how the giant HVAC system can be controlled only from a rusty side panel accessible by a ladder. Down below, an emergency room has never been used. During a recent renovation that predated Braden Health’s ownership, its doors were built too narrow for a gurney, among other design flaws.

An old operating room is temporarily housing the ER while Braden Health starts work on new renovations. The Tennessee attorney general, who must approve any sale of a public hospital to private investors, signed off in July.

To prevent this hospital’s closure in 2013, Houston County bought it for $2.4 million and raised taxes locally to subsidize operations. “We had no business being in the hospital business,” Mayor James Bridges said. “The majority of county governments do not have the expertise and the education and knowledge that it takes to run health care facilities in 2022.”

Those with the most experience, like big corporate hospital chains based in Nashville, have been getting out of the small hospital business, too.

Communities have seen unqualified managers come and go. In Decatur County, where Braden Health is also taking over the local hospital, the previous CEO was indicted on theft charges that remain pending. And the Tennessee comptroller determined the hospital helped endanger the finances of the entire county.

“You’re looking to someone who supposedly knows what to do, who can supposedly solve the issue. And you trust them, then you’re disappointed,” said Lori Brasher, a member of Decatur County’s economic development board. “And not disappointed once, but disappointed multiple times.”

Brasher expressed much more confidence in Braden Health, which she said has concrete plans to reopen, though the timing has been delayed by an unresolved insurance claim from a burst water line that flooded a wing of the hospital.

Local residents still have trouble stomaching the sticker price: $100 for a property valued at $1.4 million by the local tax assessor. In addition to that low price, Braden Health won tax breaks for committing to invest $2 million into the building.

The Houston County hospital is valued at $4.1 million by the property assessor. But the final sale price was just $20,000 — and that wasn’t for the land or the building. Kopec said the amount was for a 2016 ambulance with 180,000 miles — deemed the only equipment with any remaining value.

An agreement with Braden Health to take over the shuttered hospital in Haywood County, Tennessee, valued at $4.6 million, was a similarly symbolic payment. All told, Braden Health is getting more than $10 million worth of real estate for less than the price of an appendectomy.

Kopec contends the value for each property is essentially negative given that the hospitals require so much investment to comply with health care standards and — according to the company’s purchase agreements — must be run as hospitals. If not, the hospitals revert to the counties.

Most of the funding for restoring these facilities comes directly from Braden, who thinks people overestimate the value of hospitals his company is taking over.

“If you look honestly at a lot of transactions that take place with rural hospitals and how many liabilities are tied up with them, there’s really not a lot of value there,” he said. Braden recently paid off a $2.3 million debt with Medicare for the Houston County hospital.

He said there’s no secret sauce, in his mind, except that small hospitals require just as much diligence as big medical centers — especially since their profit margins are so thin and patient volume so low. He wants to improve technology in ways that health plans reward hospitals, limit nurse staffing when business is slow, and watch medical supply inventories to cut waste.

It’s a tall order. Braden said he can understand any skepticism, even from the hospitals’ employees. They’ve heard turnaround promises before, and even they can be wary of the care they’d get at such run-down facilities.

Still, as Kopec bounced through the Erin hospital’s halls, he greeted nurses and clerical staff by name with a confidence that belies his age and experience. He tells anyone who will listen that rural hospitals require specialized knowledge.

“They’re not the most complicated things in the world,” Kopec said. “But if you don’t know exactly how to run them, you’re just going to run them straight into the ground.”

This story is part of a partnership that includes Nashville Public Radio, NPR, and KHN.

← Prev: Big Pharma Went All In to Kill Drug Pricing Negotiations Next: Come Fly With Me: Our Birthplace, Arrgh! →